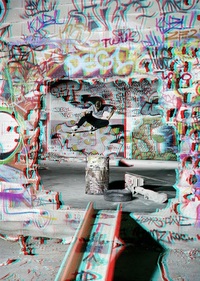 Put on the 3D glasses and immerse yourself in a hyper-real world of vibrating color, extreme tricks, and professional skateboarders. Featuring the European Carhartt skate team and inspired by virtual spaces, this award-winning volume brings the culture of skateboarding to life while exploring the thrilling possibilities of 3D photography. Skater and photographer Sebastian Denz spent three years travelling across Europe photographing some of the best skateboarders within its borders. Long before 3D became popular in current cinema, Denz used its effect to capture these striking images, including portraits of skateboarders as well as action shots in various locations from DIY spots to skate bowls situated in barns and backyards. Denz built his own large-format camera to take the 3D pictures in a never-before-seen quality and produced unique images which come to life in three dimensions and pay tribute to skateboarding culture.