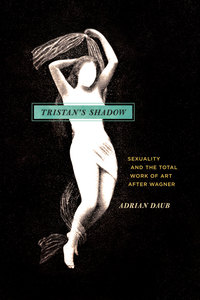 Das Rheingold, Die Walküre, and Siegfried.Parsifal. Tristan und Isolde. Both revered and reviled, Richard Wagner conceived some of the nineteenth century’s most influential operas—and created some of the most indelible characters ever to grace the stage. But over the course of his polarizing career, Wagner also composed volumes of essays and pamphlets, some on topics seemingly quite distant from the opera house. His influential concept of Gesamtkunstwerk—the “total work of art”—famously and controversially offered a way to unify the different media of an opera into a coherent whole. Less well known, however, are Wagner’s strange theories on sexuality—like his ideas about erotic acoustics and the metaphysics of sexual difference.

Drawing on the discourses of psychoanalysis, evolutionary biology, and other emerging fields of study that informed Wagner’s thinking, Adrian Daub traces the dual influence of Gesamtkunstwerk and eroticism from their classic expressions in Tristan und Isolde into the work of the generation of composers that followed, including Zemlinsky, d’Albert, Schreker, and Strauss. For decades after Wagner’s death, Daub writes, these composers continued to grapple with his ideas and with his overwhelming legacy, trying in vain to write their way out from Tristan’s shadow.