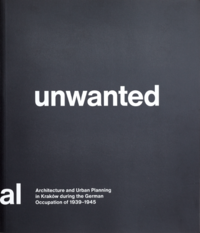 “Krakow became the focal target of the German plans to eradicate Polishness. This determined the subsequent fate of the city, which the Nazi authorities cast not only in the role of the capital of the „Nebenland”, but also that of the model German city in the East. This objective was pursued through a special programme meant to deprive Krakow of its Polishness, consisting not only in the use of bloody terror, but also in the destruction of Polish elites and cultural and scientific institutions (…). The extermination of the Polish intelligentsia came together with an intense propaganda campaign aimed at proving that from its prehistory to the era of Franz Josef I, Krakow owed all its civilisational achievements to the Germans” – “Unwanted Capital”, prof. Jacek Purchla.

This exceptional book contains over 300 illustrations, working also as a corpus of existing knowledge about the heritage of the Third Reich in Krakow. It addresses a little-known and intentionally overlooked episode from the city’s history. The catalogue features photographs of Krakow’s landmarks transformed through the presence of the scenography of the Nazi ideology – the flags of the Third Reich at the Wawel Royal Castle, the demolished statue of Mickiewicz, the Krakow Market Square, renamed Adolf Hitler Platz, almost invisible from under the swastika flags. The courtyard of the Wawel Royal Castle during the celebrations of Adolf Hitler’s birthday, the National Museum serving as a German house and casino, the Collegium Maius renamed the Institut für Deutsche Ostarbeit.

In addition to the photographs, the album features architectural and urban plans which were meant to transform Krakow into a model city of the Third Reich, comfortable for German residents and adapted to the needs of the German administration. Numerous blueprints and architectural sketches of unrealised designs constitute today not only a document of the German idea of colonisation, but also a memento from the war, illustrating terrifying plans for the destruction and complete transformation of the city to be implemented by sacrificing many lives of camp prisoners.

The visual material is accompanied by essays by Professor Andrzej Chwalba, Dr Żanna Komar, Dr Monika Rydiger and Professor Jacek Purchla, who discuss topics such as the German efforts to transform urban space, as well as the everyday life in occupied Krakow.

The Avant-Garde and The State